On stage, Syracuse shows a very different face from that in the studio. They liberate a powerful and sexy energy with an acid and psychedelic techno: 808 bass lines are banging, SH-101 acid loops swirl your brains while the synths are flowing around the voices of the duo, driving all arms up in the air.

Born in Tahiti, Isabelle grew up traveling the South Pacific Ocean with her father, ran away from home at 15 to come to Paris, where she sabotaged her study to prove her parents “she couldn’t do anything else but music”. Antoine comes from an artistic somewhat hippie family. His father used to organise a science fiction festival in Metz, where the likes of Philip K. Dick or Suicide performed: “With this background, I was destined to make futuristic live acts and music”, so Kogut. 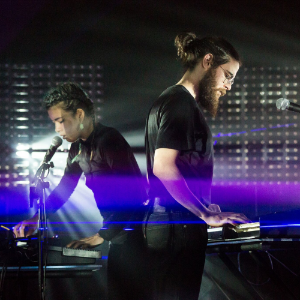