Peaches has transcended established norms both of gender and show business and lived by her own rules ever since. Recently turned 50, she still rocks the stage with the same generosity, self-consciousness and enjoyable provocation as ever. Her new focus is “to make aging cool”, in reaction and stark contrast to the music industry’s youth obsession. Her message is clear, Like in the song of her latest album „I Mean Something“: stick to yourself and don’t let anyone make you feel ashamed of what you are.
“She’s grungy, unkempt and totally unrepentant. She personifies what you’d hope a punk rocker would be: a true rebel. Her lowbrow breed of punk electronic music might not be everyone’s thing, but she delivers her performances with such conviction that it’s hard not to be moved, if only by her sheer nerve”, summarizes perfectly Urb magazine.
Born in Ontario to a Jewish family, Peaches began her musical career in the early 1990’s as part of a folk trio, Mermaid Cafe. In 1995, she established a rock band, The Shit. That year she also released her first solo album, Fancypants Hoodlum.
Moving to Berlin, she signed to the Kitty-Yo label and released her second album that was to become her breakthrough The Teaches of Peaches in 2000.
In its aftermath, she has toured as the opening act for bands like Marilyn Manson and Queens of the Stone Age.
Peaches is an icon for Les Belles de Nuit who were honoured to share the stage with her at the Rote Fabrik in 2017.
Website
Facebook 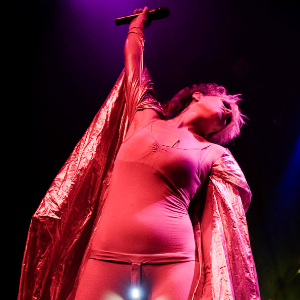