Sassy J is a DJ, music lover, promoter and handcrafting artist. She has been pooling global sounds with her Patchwork Night for the last 9 years.

Doing it strictly for the love of music – whether it is her choice of line-up or her selections as a DJ. Her enthusiasm and keen ear for new styles has taken her around the world, playing renowned stages such as London’s Plastic People and the Deviation Party, to Gilles’s Peterson’s Worldwide Festival in Sète and Sonar Festival in Barcelona.

Her mixes have been championed by the likes of 2000black’s Dego or Benji B, whilst Will Bankhead just released her Tape on The Trilogy Tapes Label. Collaborating with other like minded promoters on projects like the Stride Night or the Stadtmusik Festival in Switzerland, as well as designing the sought-after sweatshirts, shirts and jackets, Sassy J is steady buisy making those Patchwork dreams come true. 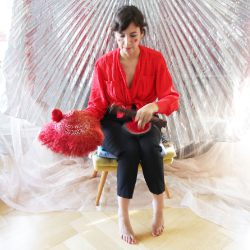